I’ve always been intrigued with perfumes. Some of them smell offensive, some of them can turn your head, searching for the person wearing that smell. It catches your attention. Lately, I’ve been obsessed with vanilla based scents. Two of which that I really love are Musc Ravageur and Tobacco Vanille (TV), the latter smelling so good I want to eat it. And so began the idea.

Although, the methods for this are actually based on a previous project, which was making a really high proof alcohol, and infusing it with flavours. Alcohol is a much better flavour carrier than water, so as a result, aromas and flavours are more intense. Essentially, this “edible perfume” is really just a high proof alcohol with a high concentration of flavour compounds placed in an atomizer. Hopefully, the flavours are intense enough that you feel like its perfume.

These are the ingredients I chose to work with. Bourbon, an old cigar (barely any flavour left. Next attempt will be with a fresh one), vanilla beans, chocolate, clove and cinnamon. These are the same ingredients people claim to smell in Tobacco Vanille.

First, distill the Bourbon to collect the alcohol. Once the alcohol was collected, place it in a vacuum bag and infuse with the ingredients. This was in a water bath at 50 Celsius for 2 hours. Then placed in an ice bath.

I had a sip of it right away, and it was delicious, but it wasn’t quite what I was looking for. The aroma is not quite strong enough to be reminiscent of a perfume. So I decided to blast it through the sonic prep; some improvement with the aroma but still not what I want. Perhaps this project will be one of those things that just require time.

The mixture is currently in a mason jar. I’ll be letting it age for about a week and see what happens.

Alternatively, I could do this again and just place all the ingredients in the rotary evaporator. Perhaps the distilled alcohol will already carry all the aromatics.

On a side note, the bourbon that was left over turned quite murky! Yet another surprise from the rotary evaporator. In all honesty, the ability of the rotary evaporator eludes me. Sometimes I think I’d get something very aromatic, but I get nothing but water. Then sometimes, it just blows me away how much aroma was transferred over.

Here’s a photo of what was left. 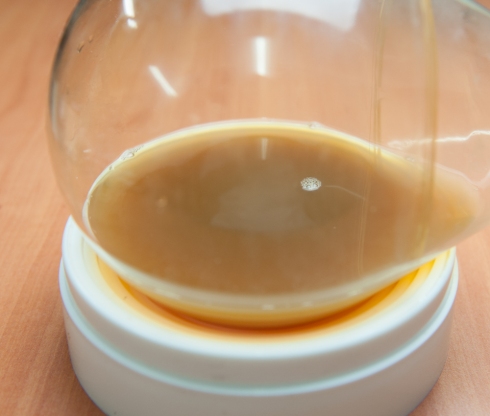 Add some caramelized sugar, and it makes for some amazing syrup.

Chef of Toronto Food Lab, a GPI division. END_OF_DOCUMENT_TOKEN_TO_BE_REPLACED
This entry was posted on Tuesday, May 1st, 2012 at 4:07 pm and posted in Uncategorized. You can follow any responses to this entry through the RSS 2.0 feed.
« SonicPrep, aka sonic emulsifier, ultrasonic cell disruptor. I like to call it the magic metal rod.
A heavenly pair – bacon and eggs with hints of Japanese flavours. »