Purity vs Complexity when components are separated

So, finally after a whirlwind work trip, I’m back. Needless to say, I’m too happy to be in the kitchen lab again. So much work to catch up on, but still found time to do a quick experiment.

Few years ago I dined at Auberge du Pommier and one of the courses served was, from what I recall, a mushroom soup served in a coffee cup. It was quite delicious. I thought hey, why not take the coffee and mushroom theme a little further. So I did, and here is where the thought of purity vs complexity came into play.

I did two trials. On the first one the mushrooms were seared for flavour, then mixed with coffee and more water. The 2nd trial was with simply making mushroom stock, and mixing the stock with a 3:1 ratio of stock to coffee. In both trials, everything was pureed to increase flavour infusion, then putting them through the centrifuge to remove the solids. At first I thought the trial with the seared mushrooms would be more delicious. However, it was quite the opposite. The batch with the seared mushrooms tasted almost awful, while the simpler one was delicious, had a pure mushroom flavour with a hint of coffee.

This is my theory for why I got those results. By removing the solids, all you are left with are the flavour compounds in liquid, which has a much stronger, faster flavour release. So you ONLY have the flavour compounds; nothing to mask/complement/ balance that seared mushroom flavour other than other flavour compounds. Because of this, the bitterness from the searing process really comes out. Remember also that I had some of the mushrooms before I pureed them, and they tasted amazing.

I suppose this theory also ties in with other experiments that involve extracting/isolating flavour. Rosemary essence from the rotary evaporator, for example, smells very close to Vicks Vapor Rub. Basil essence tastes like licorice, and it makes sense since its the same flavour compound found in both.

I could go on and on, but I’ll keep it till here and end it with a photo of the non-seared mushroom “cappuccino”. There is no dairy in this. The foam was made using a $5,000 non-dairy coffee frother, aka the SonicPrep. That is one of the things I found the SonicPrep to do really well, haha! 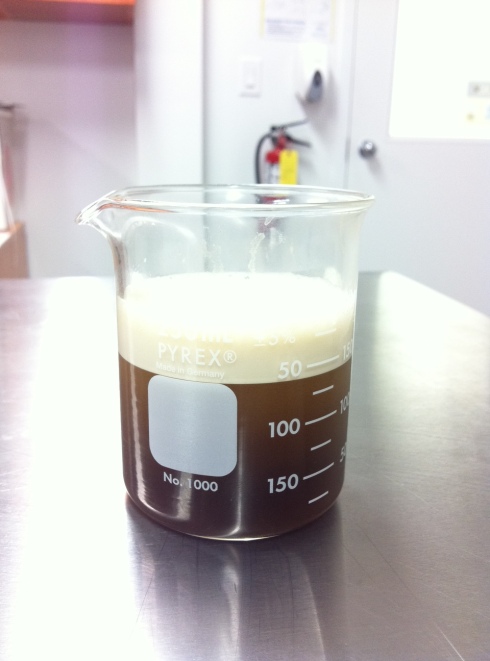