Freeze Dried Steak: What to do?

The last post I made a few weeks back compared items processed through the freeze dryer and a conventional dehydrator. Most of the fruits were consumed, they were crunch and sweet! On this post I took out the freeze dried steak and just wanted to see what would happen if. 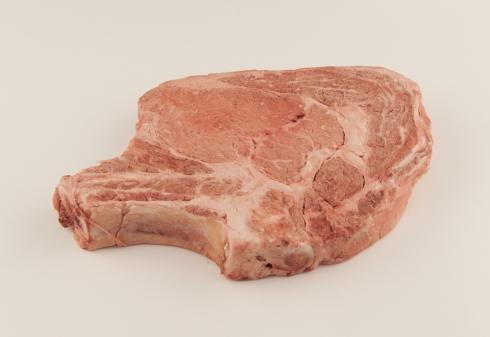 So first off we slice the steak. It’s quite easy to slice. I was expecting it to be challenging thinking that it might be very brittle. It was brittle, but it seems the muscle fibres are able to hold a structure to keep it from simply crumbling apart. Pulling it apart, though, was quite easy and what you get are tiny tiny fibers of muscle that seem to just flake off, and the larger chunks.

Next up, I sliced the steak into thin strips. The idea of this was to make something that would be similar to bacon. The interesting part is when you fry it, the maillard reaction happens extremely quickly. Within a few seconds the entire piece has browned. Of course, thicker pieces need a few more seconds for the browning to occur deeper in the pieces. The oil is also quickly absorbed by the strips.

Here, you can see a before and after photo of the strips. It still shrinks quite significantly after cooking. The taste was not bad, but not delicious either. I tried frying it in both canola oil and butter. The meat really takes on the flavour of the fat being used. That being said, it still wasn’t really delicious with the butter. Also, if the piece was just a little too thick, the texture was like chewing on woodchips, at least what I imagine chewing on woodchips would be like.

Lastly, I wanted to try reconstituting moisture into the steak. This was not a pretty sight. It just looked unappetizing. Of course, this was expected, but it’s different when you get to see it yourself. It just looks like meat that’s been in and out of the freezer too many times. It was mushy, and when you applied light pressure on it, it would be like a sponge when water comes out to the surface.

This recipe was made in preparation for a dinner I’m cooking in UK. No crazy flavour combinations again, just new ways of delivering those flavours. So, a pudding with no egg or and starch. Why? Well, I don’t really like the texture of starch, that’s one thing. For the egg, I love eggs, but funny enough, it’s considered an allergen in Canada. Personally, I don’t care about that part, but I suppose this was just a quick challenge I wanted to do. To make something familiar while removing many of its familiar components.

So the pudding is now made with only 4 ingredients – light cream (5% fat), dark chocolate (70% coco), sugar and iota carrageenan. The result? Pudding that just very very quickly melts in your mouth, with an extremely rich texture, but with lower fat content. Hey, I think I should start talking to some retirement homes.

Admittedly, the lack of starch and egg makes the pudding a bit loose. I tried it with tara gum added. It became thicker, but the texture suffered – it wasn’t as rich, and became slightly pasty.

Also in this recipe are some orange caramels, recipe from a very good friend and pastry chef Shane Harper, and some quince mostarda Shane gave me a few months back.

Though, I decided not to bring the mostarda with me to UK. I’m keeping that shit for myself.

Something I made a few weeks ago. Funny how the component that takes the most time to make are the ones that aren’t the center of attention – the reduction and the mushroom butter. 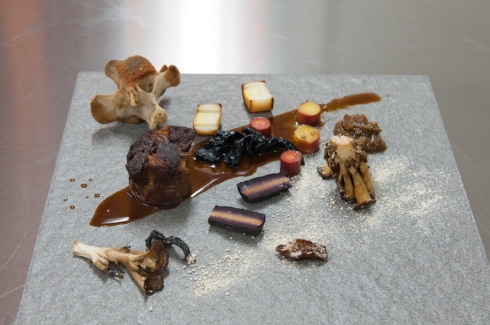 So let’s get straight to it. What did I do to the reduction and mushroom butter? Here it is.

First, the reduction is made the traditional way of roasting the bones, vegetables, and making a stock from it. Mind you, I think I had equal amounts of bone to water at the beginning. This step alone takes at least 8 hours. I can’t leave the stove turned on overnight so I had to do it over 2 work days. Then collect the stock, and partially reduce it. Just so I can actually put it all in the centrifuge vials. Once that’s done, I centrifuge it to remove all the solids, aka scum. What happens is you now have stock that is free of any solids and has the smoothest mouthfeel ever. After that, reduce it to the point where it resembles tar. That dark, thick beautiful substance that can blow minds. At the end, add a nub of butter, swirl, and done! Well, not quite yet. Put 100ml of that reduction into a beaker, and blitz it in the SonicPrep. Why? It changes the mouthfeel. It makes it even more velvety. Also, it’s not as quick to get sticky when it cools down. The colour also changes into a creamy dark brown.

Comparatively, the mushroom butter is less involving. First, brown some portobello and oyster mushrooms. The more browning, the better. Then freeze it overnight before heading to freeze dry for 2 days. Once its as dry as British humour, turn it to dust using a vitamix blender. Then just add it with melted butter.

See, I don’t even want to bother talking about the ox tail itself. But let me just say, it was damn good.